For almost 25 years, the Houston Aggie Volunteers have helped the Houston Food Bank feed at least 137,000 people each week (a population exceeding that of all of Bryan/College Station), providing more than 65 million pounds of food and prepared meals annually. 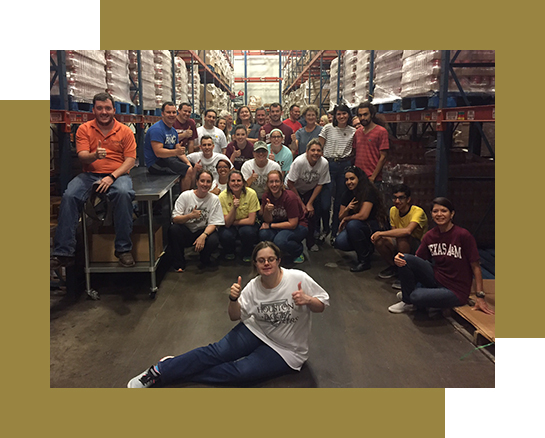 It is estimated that at least 30% of the recipients receiving food are children under 18. Houston Food Bank distributions are made through over 200 Houston-area nonprofit and church-related pantries, which must meet stringent certification standards. In 2011, the Houston Food Bank moved to a much larger location, and this major expansion sadly reflects the growing need for the services of the Food Bank.

Founder William Wade had the following to say about the Food Bank:
“The Houston A&M Club Board of Directors recognizes that many local Aggies are constrained by work and family obligations from participating in our luncheons and other activities that may occur during the workday each week. In addition, we recognize that younger Aggies are often constrained by tight budgets, as well. However, the Houston Food Bank offers a great opportunity for someone to get involved with the Club at little cost (gas money), to make new friends, promote A&M’s good name in the Houston area and to address a pressing need for help. Over 90% of all work at the Food Bank is performed by unpaid labor. The Food Bank would simply shut down if not for volunteers. In addition, there is no doubt that fellow Aggies have benefited from the work of the Food Bank – Aggies are not immune to the ravages of a down economy, family crises and the like. I have represented these Aggies in my law practice, and it is very compelling to see families in need. No kid in Houston should ever have to go to bed hungry. We need your help, especially all of you young Aggies – missing one happy hour or movie night a month is a small price to pay for what we all owe back to our community.”