Cost: $25 covers both lunch and dessert

Grotto is following all health and safety guidelines set by the state and the health department to ensure your safety.

We ask that all our guests:

This is an in-person activity. Every attendee must evaluate their unique circumstances and make an informed decision before attending in-person activities. The Houston A&M Club recommends that no one in the higher-risk category take part in-person. Anyone who feels sick must Stay Home. If you become sick or develop symptoms, isolate yourself then go home and seek care. The Houston A&M Club cannot make any guarantees of safety and you are attending at your own risk. 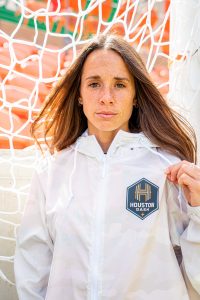 Shea Groom is a Houston Dash midfielder and Aggie Soccer legend. Groom joined Houston in 2020 and helped the Dash win the 2020 NWSL Challenge Cup, bringing the first league title to the city while earning Championship MVP. Prior to joining Houston, Shea started her professional career in the National Women’s Soccer League as the 12th overall selection in the 2015 NWSL College Draft and has since recorded 22 goals and 12 assists during her 6 years played.

The Librty, Missouri native spent her four-year collegiate career at Texas A&M University where she led the Aggies to 4 SEC Championships and their first-ever appearance in the NCAA Women’s College Cup in 2014. Groom capped a decorated career as the 2014 SEC Offensive Player of the Year with 16 goals and 7 assists in 26 matches as a Senior that season. Throughout her four years as an Aggie, Shea scored 41 goals and started in 80 of 85 matches played. 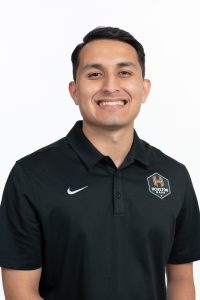 Carlos Martinez-Gloria became the Houston Dash Team Administrator in 2019 after 2 years of working within the organization at various operational roles. Before accepting the position, Martinez-Gloria served as Director of Club Operations with the Houston Dynamo’s Premier Development League affiliate, Brazos Valley Cavalry FC. During his time with Brazos Valley, the Cavalry won the 2018 PDL Mid-South Division and reached the 2018 PDL Southern Conference Semifinals.
Following his time with the Cavalry, Martinez-Gloria served as Scouting Manager within the Houston Dynamo Academy. His responsibilities included organizing scouting networks to discover young talent within the greater Houston area and identify under-23 prospects nationwide.
The College Station, Texas native is a graduate of Texas A&M University, where he holds a BS in Economics with a Sports Management minor. 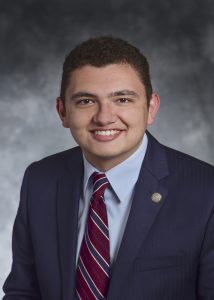 Eric Mendoza ’21 – Texas A&M Student Body President
Eric Mendoza ‘21 is a second-generation Aggie from Clear Lake, Texas, pursuing both his Bachelor of Science in Economics and Master of Science in Finance. This past year, he served as the Student Body President of Texas A&amp;M University, and the President of the Chancellor’s Student Advisory Council for the Texas A&amp;M University System. Previously, he has served three terms in the Student Senate where he chaired the Student Services Committee, Legislative Affairs Committee, and eventually served as the Speaker of the Student Senate. While on campus, Eric has also served as an ambassador with the Texas A&amp;M Foundation as a Maroon Coat; a delegate on the Spring Leadership Exchange Program with our Texas A&amp;M University-Qatar campus; has been named to various university-level appointments including the President’s Commission on Diversity, Equity, and Inclusion, and the Presidential Search Advisory Committee; and has been recognized by the Association of Former Students as a Buck Weirus Spirit Award recipient. Eric is dedicated to civic engagement and public policy and hopes to work in the Washington, D.C. area after graduation.
+ Google Calendar+ iCal Export